Last Tuesday I helped with a school outing.  Armed with my list of young people who were my responsibility (so I couldn’t lose any of them) and 4 sheets of paper with the risk assessment on it – I boarded a bus full of excited “year ones” and we set off to visit the Angel of the North.

I like the angel – though many don’t – and I have to say it took me while to get used to it, but now? well, I love it, although I don’t see it up close very often – this was only my second visit!  I find I have this in common with lots of people around here – we see it regularly, drive past it often, see it from the train – but almost never get up close. 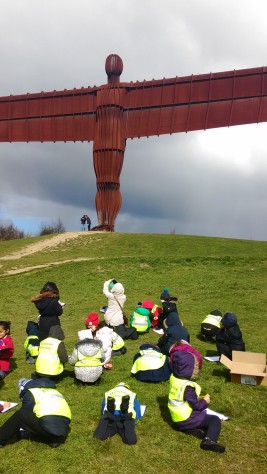 It was a cold day, and while this photo looks quite sunny, it was freezing cold; not long after I took the photo, it started hail stoning so hard that it stung the children’s faces.

Their task was to draw the angel – and they did their best , with freezing fingers, to do the angel justice.  And while the children were busy drawing, I had time to wander around and take in the sights.

It’s a special place up on that hill. The angel has become a focal point, not only as a landmark, but as a special place; a place where people bring memories and prayers.  At the bottom of the hill there is a small area of newly planted trees, some with ribbons and teddy bears tied to them.  Many with prayers and cards attached.  I had heard that not long after the sculpture was finished, it was discovered that people were writing prayers on pieces of paper and tucking them into crevices under the angel.  And it seems that people visit regularly, almost as a pilgrimage?

While a relatively new addition to the northern landscape, it appears that this has become a very special angel for some visitors.  They have no need of a church, or a pastor – simply a focal point in a special place with the open sky over their heads, and to be left alone with their thoughts.  I don’t know how many of these visitors would call themselves “religious”, but somehow they are finding comfort by bringing their concerns and spending time with the angel.  Would you call that God working in their lives? I might!

As we left it seems that the gigantic figure had made an excellent impression on the children too – as we walked through the snow to the bus, they all turned around and waved and shouted “goodbye angel”  I was touched – I had a lump in my throat – and I don’t even know why!

One thought on “An Angel in the north”